When we decided to go to USA we were recommended to go to a Premium outlet. We had our eyes on one in San Francisco, but since we didn’t end up there we had to rethink that plan. We asked our friend Google if he knew a place in Chicago and was told to go to Aurora. Good thing, we thought, but wasn’t sure how to get there. We found a tourist information and went in to ask for help. The lady we met told us that they had opened up an outlet center close to the airport, and that it was a lot easier to go to than the one in Aurora. The center was called Fashion outlets of Chicago, which is why we didn’t find it googeling Premium outlets.

From city center we took the train from Clark Lane to O’Hare, and a shuttle bus to the outlet. When we got back home we found out that you could take the train to Rosemont instead and get a free shuttle. We paid about $20 for our shuttle.

The center has 130 stores, which is quite a lot compared to the malls I’m used to at home. And the prices are not to talk about. USA is really cheap compared to Sweden to start with, and with all these sales I can tell you I was in heaven!

To give you a hint about the prices in USA compared to Sweden, I bought a shirt for my brother that he has been looking at here. I didn’t buy it at the outlet, and it wasn’t on sale, but still it was less than half price of what I would have to pay here.

When we arrived we went to the information desk because we wanted to buy Green Saving cards with additional discounts. As we told them we were from Sweden we got the cards for free (instead of $5/each) if we could show our ID-cards, proving we were visitors. Most discouts were something like “additional 10% off if you shop for $100”. We did use quite a lot of those discounts, so they would have payed off, even if we hadn’t got them for free.

We arrived around 11a.m. and left after 6p.m. And we did some great findings! Brands that I would never be able to buy at home, to prices that I usually spend. US Polo and Calvin Klein became the stores that we opened up our wallets to the most. Did some fantastic deals there. If I did have to pick my absolute favorite from the outlet I think it would be my DKNY “cozy”, a cardigan that you can wrap in several different ways. Original price on the price tag was $175, I paid around $50, including taxes.

We found the center big enough to have everything we wanted, but not too big so we were able to check out all the stores and still go back if we realized we missed something. There was a big food court so it wasn’t any trouble finding a place to sit when you needed a break.

We would really recommend going to this outlet center, especially if you’re used to European prizes. Keep in mind though, that this is the first one I visit and have nothing really to compare with. We will for sure go back there next time we go to Chicago. 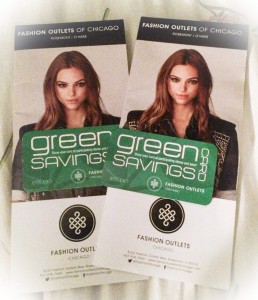 2 thoughts on “Fashion Outlet of Chicago”