The sun is shining brightly, and I’m soon about to go to work again. For not being supposed to work full time it feels like I do nothing but work at the moment. But tomorrow, finally, I have a day off and as that wasn’t enough the football season starts as well! Feels like I’ve been waiting forever for that!

Yesterday I got the opportunity to buy some perfumes for half price of the store price. That’s something I love, but tend to not buy since they are quite expensive. I fell for three smells that I brought home. (Unfortunately one of them wasn’t the same as the one I was smelling in the store, but when I got over the disappointment I grew to like the one I got as well. Lesson learned; Look at the bottle and not just at the box the bottle’s in when you smell a test.)

Downtown from Calvin Klein –  I actually tried this one in store a couple of weeks ago. I liked it, but decided to walk around in it for a couple of hours to see if I would feel comfortable in it (which I always do if I’m about to pay full price for a perfume). I did love it, but the shopping spree took another turn and we never got back to the store again. I’ve been looking for it since! (It must be faith that brought it to me to a much lower price)

The perfume is described sophisticated and feminine, with a confident edge. I could buy that perfume from just that description.

Si from Gioirgio Armani – My all time favorite perfume (so far) is Diamonds from Armani. I still do have some of that left, but want to buy a new one. They didn’t have that one where I got these perfumes, but my attention was instantly drawn to others from the same brand. I fell for this one and asked my mother to smell it. The reaction was instant: “Take it! It smells like you” Said and done, the perfume went into the basket.

When I was googeling this perfume to find out how it’s described I noticed that the opinions on this one seems to bee really different! Some really hates it, some loves it. I guess it’s one of those fragrances that actually comes off really different depending on the person wearing it.

The descriptions I found tends to relate it as an irresistible combination of grace, strength and independent spirit.

Pure DKNY – This was the smell I think I got wrong. When I came home it smelled a lot like rose, and that is not a smell I’m usually really comfortable wearing. Too flowery scents just doesn’t feel like me. Since I wasn’t going anywhere I decided to try it on and see what it was like. Maybe I could figure out who to give it to… But I grew to like it and think it will be a nice fragrance for summer.

This one is described as straight forward but soft, sober and easy. A wonderful garden rose, without the heaviness of the garden rose. This is sounds like a pretty good explanation of why I like it even though it’s not what I normally falls for.

Have you ever used any of these fragrances? Do you like them? 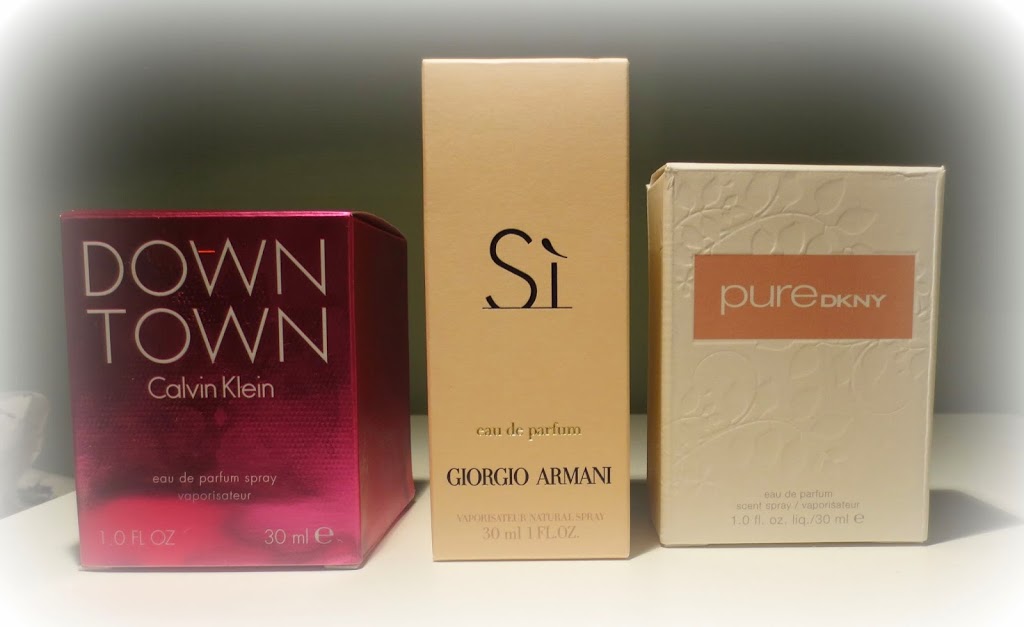 2 thoughts on “New to my fragrance collection”